As part of the ramp up antics for the ds106 headless double header extravaganza Friday, I managed to get a video that represents a real problem for the GIFaChRome folks

The full story and innuendo has been published there by possbile rogue or double agent BB.

The silliness does not stop, the shark is not yet jumped.

And the remixes mix on.

Since the images of the GIFaChrome right there on the home page bear a lot of resemblance to the Hasselblad large format camera, one could see that one of the world’s most renown camera brands would not be very pleased.

But to play with it more, I decided to change the name slightly, and who could be a better namesake face that David Hasselhoff? A video was found where he is being interviewed before a conference and its not much more of a step to confuse the two names. And so since the parent company is Sweden I plotted that the speech made should be in Swedish, and there is one voice that comes to mind- the chef from the Muppets show.

The video then just took some slipping in some audio of the muppets character to represent Hasselhlof’s voice, and his message is done as subtitles. Added in a little graphic, tossed in as a Picture in Picture in iMovie- if you do a transparent PNG, it can almost act as a second layer. This was a second version with a back black drop I thought I might use (but didn’t)

One trick for that in iMovie is to make the graphic 720px x 480px dimensions, so the image has the same aspect ratio as the video… it can be cropped cleanly.

Of course Rochelle reminded me I may have missed another opportune connection, the Bugs Bunny episode where he is the guest in the kitchen for the main ingredient of “Hasenpfeffer”.

Maybe that can be a sister company.

#tdc3060 #ds106 You and your favorite book. Combine that pair into art. We want to know the title of the book. 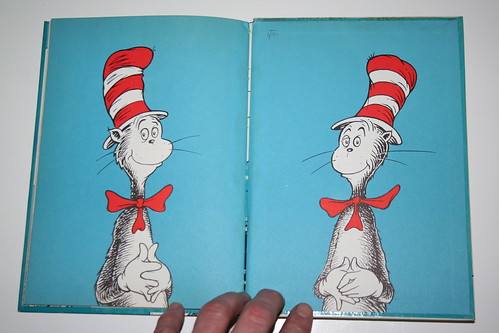