The point of ds106 Daily Creates is something that should not take much work, so really it is more than enough to just do them and get them posted somewhere. It is helpful, and suggested for people in Headless ds106 who have some experience, to try sharing some of the behind the scenes notes of their work. Some people make new blog posts per each; I tend to aim for a weekly recap, for which I have created a new blog category. This is usully what I require of my registered students when I have a class.

Once again, how you do it is up to you. Here are mine for this past week. It’s been good to see a burst of Daily Creates from people new to the game. 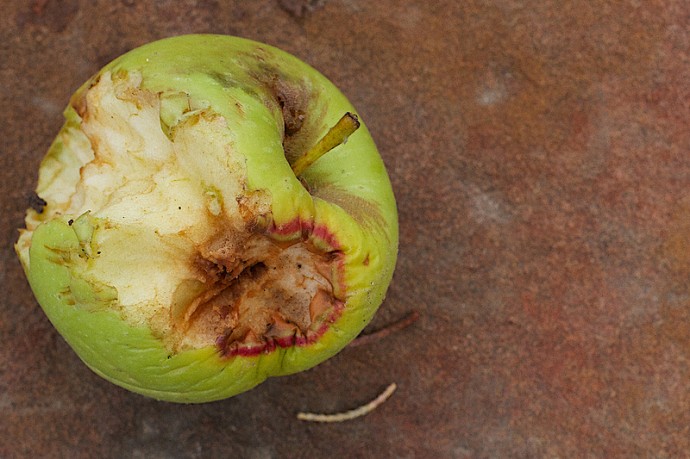 This is one of those assignments where you can think of different ways to interpret what it means. An indentation can be something made, found, or metaphorical. If a TDC is a photographic one, I try to get outside with my camera in the morning and try to capture something that could work if I do not find it later. In this case, the dents and nibbles in this fallen apple seemed like it would do.

My photo title “Apple + Gravity < Rock" is just attesting to perhaps the fragility of something soft landing on something hard? I admit setting the shot up, the apple I found a bit to the right on the ground beneath the tree, but putting it on a rock gives it a more interesting and simple background, and maybe a suggestion of an event. I have no problems staging an object for a photo. TDC 597: Edit an existing video clip to include an unexpected object in the story (Aug 27, 2013)

I am pleased to see ten submissions for this Daily Create- video tends to scare people away. And this one potentially could call for complex video editing, which is what we don’t necessarily want to be asking people to do. For this kind challenge, to me, it calls for juxtaposition of things, characters you would not expect to be placed together.

I was not even planning to do this one, but a tweet from David Kernohan nudged me to try:

Dear #ds106 – video editing is HARD. Anyone about to chip in with a TDC tip? #headlessds106

Because I wanted to see what I could do with the YouTube video editor, a web based video editor that allows you to mix and edit your uploaded videos. I did not have a plan, but the firs video in my list was an early Daily Create (TDC590), the tour of a refrigerator. It seemed like a cut to another clip and back makes for the same thing as making an object appear within a video (which is much harder to do in basic video editing software). What would be unexpected in my fridge? Well what about Jules Winnfield, from Pulp Fiction? I had a clip of his “All me to retort” line from my older MOOC Mocking clip – MOOC Fiction.

It worked good timing wise, right when I mentioned “tub of spread” he slides out. I also tried adding some of the YouTube supplied audio beneath the clips.

This was worth the effort to better understand how the YouTube editor works, a bit tricky to figure out where to do the cuts, but once you do a few, pretty easy.

I had not thought of a present for Giulia, so a few days earlier I got in my we head this clever way to have other people make something for her day. She deserves it for having done so much for ds106 over the years, and what a showing- I see 35 drawings listed here.

Drawing is one of the things ds106 has stretched me in, because I was one of those people who would shrug and say “I can’t draw” — but what you really say with that line is, “I don’t want to try”. So over the past year, I usually pick up Paper 53 on my iPad. The variations in pens and brushes are fun and not always predictable to use. As I have used the app, I sometimes start with the background using the paint brush, and draw over that. I also, as in this case, start first with a grey pencil to sketch in the basic elements.

The idea came from July 2012 when I took Giulia to see the Grand Canyon, and he day hiked about 1/3 the way down the Grandview Trail, which is pretty steep and has plenty of sheer drop offs. It became a running joke when she commented on the lack of guard rails at the Grand Canyon, so thus came my idea.

I worked some from the photos I took that day, though I always get the perspective of the Grand Canyon a bit off. I even copied one of the oval people shapes she uses in her own work. Writing text is hard for me in this app, as you cannot zoom in to draw (or I cannot figure out how) and my finger tips feel imprecise.

Hey, who put all the drawing ones on this week? Oh yeah, I know. My inspiration here was thinking of a classic edifice like Roman architecture. and the big thick letters you sow inscribed on the plinths (is that the right term) above the columns. I googled a bit to find some diagrams of roman architecture, and decided to draw just a section between two columns.

it was not til I looked up my Roman numerals to find that 600 was DC, and it clicked that it was perfect for TDC! What luck. I tried in this one to mix in the pen lines as away of drawing detail or shape over the paintbrush texture. As far as the lightning bolt, I have no idea why I put it there, I started doodling with yellow thinking a bright accent color would help.

What? Another drawing? Based in Numbers? WHat is going on at the Daily Create?

I was not going to do this one, but when I was walking around my house, I spotted a space above my bookshelf that I thought would work if I could get a series of photos of my hands spelling out 6-0-1. Actually I tried first to see if a reflection shot in my bathroom mirror would work, but a test shot did not give an effect I liked.

So I cleared off my shelf, set the camera on a tripod, and noticed the light on the wall was not the greatest. So I shifted over towards my back door, where I have a neutral background of my carpet. Pointing the camera downward from the tripod worked, and the natural light in the open door works well. I thought the rectangular pattern in the carpet would help if I stitched photos together.

I figured I would need to mark the area that the frame covered, so I placed pens just outside the boundary, here in a photo I took to show the setup: I did two series of shots, one spacing the hand numbers from left to right — it is actually four shots since I had to put my finger in a “1” to add to the “5” to make “6” — and I did another set where the hands where in the middle.

I did have to stitch them together on Photoshop for the image above, and it ended up wider than the original spacing.

It was only after posting when I realized I had done a photo rather than a drawing, but it is good to demonstrate for the Daily Create that you can do them anyway you like.

Just for fun, I used the other sequence to make an animated GIF in photoshop, importing the four images (merging the first two to make a 6), and then using the option in the animation window to convert layers to frames. I also tried for the first time using the Tween options, between the first and second photos, and the second and third. It makes a sort of cross dissolved, but does add some heft to the final GIF, this one coming in at 1.3 MB

Woah, that is five daily creates this week. But then again, I was in training all July.