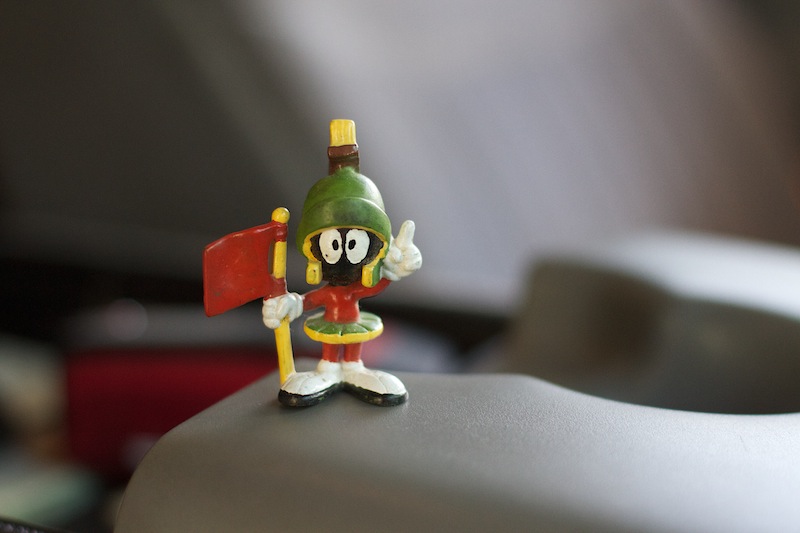 It’s been a while since I have seen Marvin. He was excited to travel with me on my big trip in 2011, it was his idea to jump out at every stop to get a photo. He was reliable for a few photos, but somewhere north of Kingman AZ, he disappeared.

I was pretty sure he just jumped into some convertible since he got googly eyed every time he saw a pretty woman in a ‘vette, and there was a blonde in a red shiny one at that last stop south of the Hoover Dam crossing.

But I guess he was stuck in my truck this whole time. I never hear him, or he never called for help, or he was stuck in a coma. But today he woke up and made his way home.

Hmmm, I’m not sure I am ready for sharing the house with a Martian.

I was kind of stumped on what to do for my daily photos today, and came up with the idea of Marvin making his way out of the truck, trying to do some low camera angles, or up angled ones to emphasize the scale. It was 99% improvised, just moving him form different spots out of the trick, up the steps, and into the house. I was going to end with marvin safe and sound on the pillow, but got the idea of the last twist being ho the little bugger just martian-handled the remote.

Uploaded photos to flickr and plopped them into a set so I could make an embeddable slide show.

This is a bit of a jump ahead to things in ds106 we will try in telling stories just in photos. I try for that daily with the camera, that’s my own personal course.