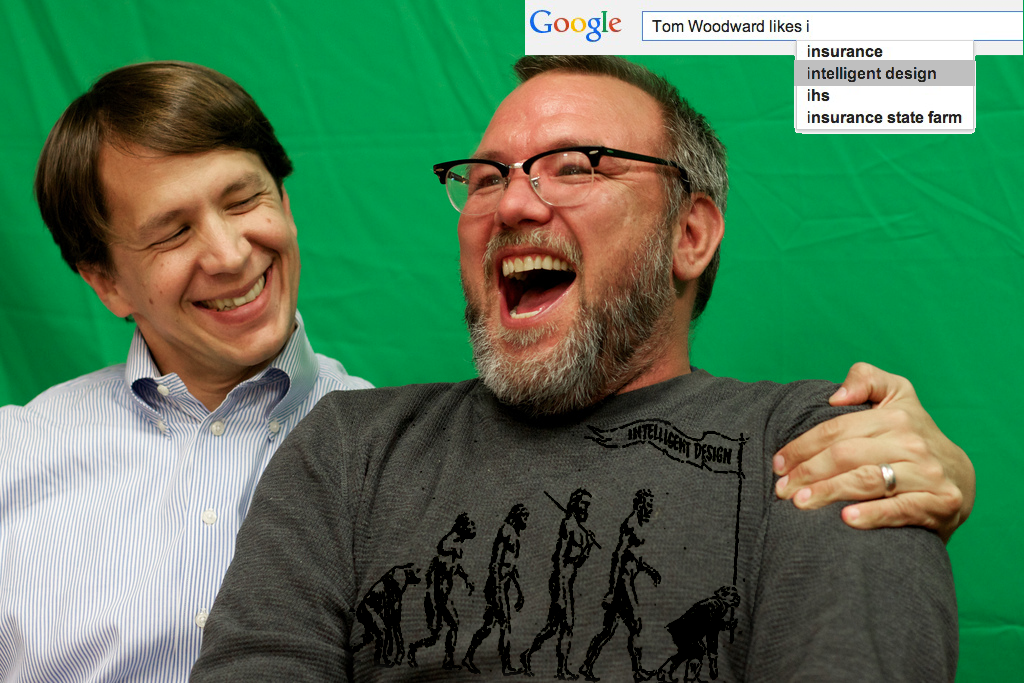 Tom keeps pumping out his creations of the Illustrating Odd Autocompletes assignment he spun out this gem featuring my pals Gardner Campbell and MC Hammer (!) and so… turn about is fair play. I went to The Google to find what Tom Woodward Likes, and found…

I actually went firs for a google search on Intelligent design and settled on the comic that was included in a blog post “Intelligent Design” Vs “Darwinism” (okay I am stomping on rights to use this image, it comes from a Ning url, and a reverse image search turns up hundreds of places it appears online; it is a cartoon by Rex Babin, deceased comic artist from the Sacramento Bee. Fight for the RemixRight!)

I then searched my own flickr photos for pictures of Tom, maybe I would put his head in the cartoon, but I just loved this one of him and Jim Groom I thought about trying to erase the background from the comic to see uf I could put Tom and Jim behind it, but it was impossible to cleanly remove the background white. Then I hit the brilliant idea that I might be able to place it on Jim’s chest like a t-shirt design. With a little bit of rotation, distort, it had the right orientation but still looked like a cheap ;paste job. Playing with the layer modes, the COlor Burn option turned out to be the winner to make the image look more like it is a design Jim is wearing.

So Tom likes intelligent design,,, what other possible thing could explain the existence of Jim Groom?

Written up here just to tag another example for the assignment.